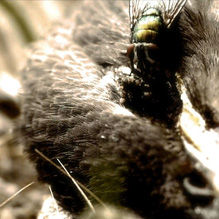 My video for the single All Could Come True by Dennis Hopper Choppers, the first single from the album Be Ready. Filmed in May 2011 in Almeria, southern Spain.

Dennis Hopper Choppers was one of the one-man bands featured in my documentary film One Man in the Band (2008). A few years later, Ben Nicholls of DHC had written and recorded a new album. It was produced by Ben Hillier, famous for his work with bands such as Depeche Mode and Blur. This new album wasn’t one-man band territory – large portions of it had been recorded by a 7-piece band – but, in my opinion, it still has that slightly melancholic one-man band vibe.

Ben Nicholls and I decided to spend the video budget on two bargain flights to the south of Spain. We spent a day and a half driving around the hills near Tabernas, the filming location for Sergio Leone’s westerns A Fistful of Dollars (1964), For a Few Dollars More (1965) and The Good The Bad and The Ugly (1966). Following in Clint Eastwood’s footsteps, we improvised a music video shoot that incorporated cacti, abandoned meat-drying sheds, and dead birds.