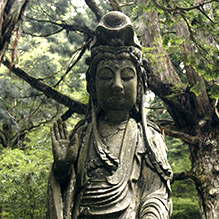 A visit to the town of Koyasan in Wakayama Prefecture, Japan, in the company of Donovan Bailey, sports commentator and retired sprinter who broke the world record in the 100 metres race at the 1996 Olympics.

This was one of two films made in July 2016 for the Japan National Tourism Organization. They were screened on BBC World during the 2016 Rio Olympics and heavily featured on the JNTO website.