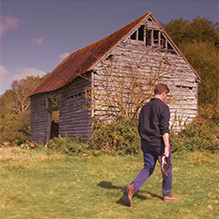 The Servants’ Ball had a long tradition in the country house estates of Britain and only really died out with the onset of the Second World War. It was a party at which the domestic staff mixed with their employers as ‘equals’.

The tradition draws on the ancient Twelfth Night ritual of inversion – a time of mayhem and masquerade. During this brief period, the world was turned topsy-turvy, working class became genteel, degradation became entitlement, servants got to rule over their masters.

At the Servants’ Ball, servants, tenants, families, local tradesmen and their wives were the guests of their employers and even the lowest ranked staff could be found dancing with the master and mistress of the house. The balls were a cultural melting pot at which society music of the day (including the 1920s dance crazes coming over from the USA) would be performed alongside traditional English country dance tunes, often by the same musicians.

This video is Number One Step Dance, performed by a band named The Servants’ Ball, and featuring the step dancing of Ewan Wardrop. It was recorded in one camera take at The Martin Family Farm near Cowfold in West Sussex.

The track is taken from The Servants’ Ball album, released 6th December 2019.

The Servants’ Ball are:

Thanks to The Museum of English Rural Life and Lottery Funded by The Arts Council England.