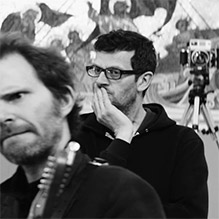 The Making of Franklin

Album producer Ben Hillier talks with musician Ben Nicholls about the ideas and recordings that went into ‘Franklin’, an album by Kings of the South Seas, released in February 2018. The music on the album evokes the spirit and hardship of missions to find a north-west passage in the icy arctic wastes of northern Canada, focusing on Sir John Franklin’s fateful mission that departed from London in 1845. Once Franklin reached the arctic, both his ships HMS Erebus and HMS Terror disappeared, and the missing seamen became the focus of numerous explorations to discover what had happened to them.

I made ten films in September 2017 to accompany live performances of the album by Kings of the South Seas. This is the documentary short that I made to accompany the album release.