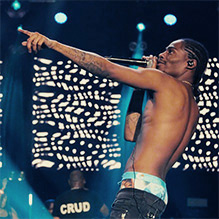 Due to the coronavirus pandemic, many music events were cancelled in summer 2020. The Wireless Festival had been due to take place in London’s Finsbury Park, but instead took place – without an audience – in London and Los Angeles. It was filmed on multiple 360-degree cameras by Melody VR and streamed online from 3 to 5 July. Fans could watch the performances on phones or other devices, using the virtual reality technology to look around as they wished.

I filmed the UK music acts using conventional 2D cameras for publicity materials. This is an edit of performance footage I shot in London’s Alexandra Palace.